On Friday April 27, we mourn the loss of 338 lives lost to accidents or occupational disease in Ontario in 2011.

Check with your labour council for details in your community.

APRIL 28: FIGHT FOR THE LIVING, MOURN FOR THE DEAD

(Toronto, ON) - Thousands of workers, friends and families of those killed and injured on the job will gather at ceremonies across Ontario to commemorate the labour movement’s most solemn occasion, the annual Day of Mourning, and to call for the vigorous use of the Criminal Code of Canada provision that enables prosecution of corporate executives, directors and managers who act wrongfully or negligently.

This year also marks the 20th anniversary of the Nova Scotia Westray mine disaster, the site of the underground methane explosion that took the lives of 26 workers. The ensuing inquiry conducted by Justice Peter Richard released the official (and damning) report "The Westray Story, A Predictable Path to Disaster.” The events resulted from “a complex mosaic of actions, omissions, mistakes, incompetence, apathy, cynicism, stupidity and neglect.” Yet, even after the mine tragedy, not one person went to jail – even for a day.

That unspeakable injustice prompted years of relentless lobbying by the United Steelworkers and families of the dead miners. Finally, in 2004, they won the unanimous consent of Parliament for a new criminal code provision that could hold executives and corporations criminally liable for negligence causing death.

Bill C-45, also known as the “Westray Bill”, was a huge win for the labour movement.

Workers across the country applauded the move to impose criminal charges on employers who wantonly jeopardized the safety of their workers. We welcomed the promise that serious sanctions would ensure that we would never again see another disaster like the one in Nova Scotia.

However, since the law was introduced, no Ontario employer has ever been brought to justice.

In the eight years since Bill C-45 was passed, more than 500 Ontario workers have been killed on the job and more than two million injured and NOT ONE ONTARIO EMPLOYER has been criminally convicted or sent to jail.

“It is a disgraceful failure of the government and the courts that Bill C-45 has never resulted in the successful prosecution of an Ontario employer for a workplace death or injury,” said OFL President Sid Ryan. “We need a commitment from every police chief in Ontario that they will educate their forces on Bill C-45 Criminal Code provisions, conduct thorough investigations into workplace deaths and pursue employers to the fullest extent of the law. We need to stop the carnage in the workplace, now.”

“How much more prompting does the Attorney General need before he finally takes his responsibility? It falls to him to ensure that Crown Attorneys are educated and committed to utilizing C-45. How many more deaths is the government going to permit before it makes use of the most effective tool it has?” said OFL Secretary Treasurer Nancy Hutchison.

In 2009, the OFL’s “Kill a Worker, Go to Jail” campaign for C-45 led to a province-wide review of health and safety laws. It resulted in amendments to the Occupational Health and Safety Act and the Workplace Safety and Insurance Act. Once they are fully implemented the recommendations will be the most significant changes to Ontario’s health and safety system in over two decades.

But they do not go far enough. Last year alone, there were 436 fatality claims and 240,342 reported injuries.

“The Liberal government should see every preventable workplace death as a travesty and honour our fallen workers with the same recognition and pursuit of justice that is afforded to fallen police officers. Justice should know no bounds,” said Ryan.

The OFL’s “Kill a Worker, Go to Jail” campaign will not stop until bosses and CEOs learn that if they endanger the lives of workers, they will be escorted from their boardrooms in handcuffs to serve prison time.

This April 28, honour the memory of fallen workers by demanding that negligent bosses go to jail. 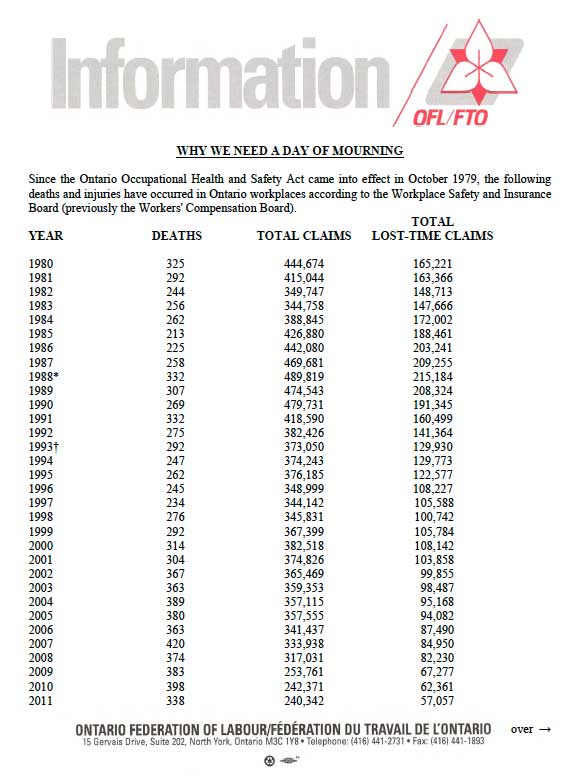