No Frills Members Vote to Join the NDF 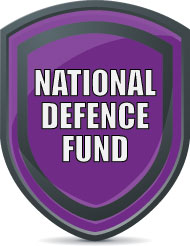 Local 1000A members working at No Frills have voted to join the National Defence Fund (NDF). Polls were held across Ontario from May 22 – June 10, 2015

“By voting to join the NDF, members have sent a strong and clear message to their employer,” said Pearl Sawyer, Local 1000A President. “They are preparing for negotiations in 2016, in the event of a labour dispute.”

Members had been informed about the option to become part of the NDF through a tele-phone townhall, notices posted and distributed throughout the stores and mailed to their homes, postings on the website, through Connections magazine and at union membership meetings held across the province earlier this year.  Members’ enrollment in the fund is effective July 1, 2015.

The National Defence Fund is essentially a strike fund that individual bargaining units can vote to join and benefit from. It provides members, who are part of the NDF, with support when they need it most. It strengthens members’ position during bargaining in an effort to prevent strikes and lockouts.

As a result of these detailed presentations and discussions  the members working at No Frills voted in favour of the $1/ week contribution level for full-time, and $0.50/ week for part-time. This translates to an additional picket pay benefit per week of $100 for full-time and $50 for part-time upon qualifying for and completion of picket duties, and are paid in accordance with the NDF picket pay program, which mirrors and is consistent with the International and Canadian Council programs.

Additional details regarding the NDF are available through your union representative.

The NDF is just one of the many ways Local 1000A members are preparing for 2016. Thanks to all the members who came out to vote and made their voice heard.