The three-year contract is effective from October 29, 2020 to October 29, 2023 and covers approximately 120 members. Workers made many gains, including job security protections, paid sick days, fair wages and an expanded benefits plan.

Karen Munk, a negotiations committee member and Packer with the company for over four years, was elated to get a first contract.

“Looking forward to getting this contract was the hopeful light that kept us going during the pandemic,” said Munk. “It’s been so uplifting and overwhelming – this was the the boost we needed.” 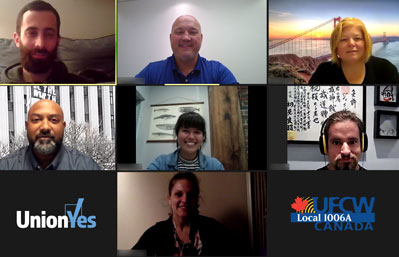 “We’re very proud of Mama Earth workers’ resolve to fight for a fair union contract that recognizes their hard-work and commitment,” said President Wayne Hanley. “The strength and stability that a union contract provides workers is so important, especially during this pandemic.”

Achieving three paid sick days in the contract was an important win for members.

“Considering the pandemic, the sick days are significant for us,” said Munk. “A transparent wage structure represents the values of fairness that we wanted," she added. "We know what to expect, and everyone gets an increase."